This little guy is 9 months old! He's hit so many milestones that he's more of a big guy than a little guy now! 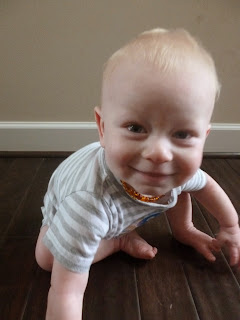 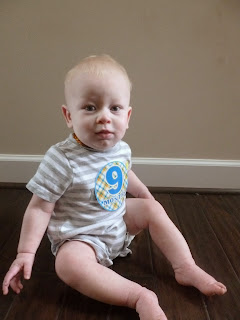 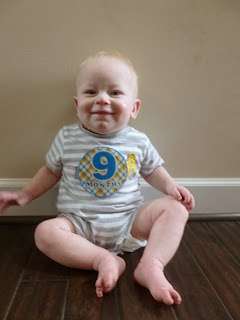 Sleep: Still naps twice a day and wakes once at night to eat. (Broken record here. Maybe one day I'll get to type that he sleeps through the night.)
Awake: Sam learned to crawl and pull-up all in one week. He really started crawling on August 20th and just two days later he pulled up in his crib for the first time! Loves to play with balls, the magnets on the fridge, and enjoys pulling the magazines off of the ottoman.

Eating: We're still nursing, but he has gotten much better about taking a bottle for Nick. Eats a mixture of baby food and table food. Some of his favorites are pieces of sweet potato, carrots, cheese, and chicken. He has mastered the "pincher grasp" which makes self feeding much easier.
Other fun facts: Sam is usually a quiet baby around other people, but is a little chatterbox when it is just us. He likes to say "bababa" and "dadada"...no "mamama" yet! He has two teeth now and boy does he know how to use them! It's really entertaining to watch him get a bite of something.
Posted by Southern Belle Mama at 10:59 AM