I've been on a break from posting my Top 5 Friday, but due to circumstances this week (which I could not cohesively share in any other post) I'm bringing it back.


1. had oatmeal sneezed at me


2. recovered 5 random pair of underwear from Monkey's room. Locations included the toy box and on top of the television.

3. lamented the appearance of "the girls" in my bathing suit after birthing 2 babes.


4. experienced the Bug taking her shoes off, standing in the highchair, and testing her lung capacity in the middle of Sushi Thai ...prompting me to once again realize that I have what can only be described as one of "THOSE" children. (Thank goodness this side of her isn't always present.)


5. given up, cried uncle, waved the white flag, and surrendered to they toys. The mess is here to stay. 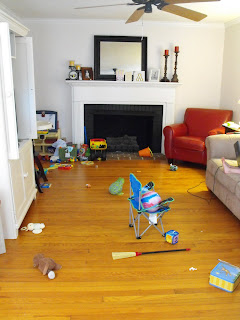 Posted by Southern Belle Mama at 7:48 AM