A lot has happened since the last time I wrote. I was 34 weeks, 6 days in my last weekly pregnancy post. I took a picture at 35 weeks, 6 days, but was feeling pretty crummy so I just never got around to writing out my post. Here's the belly! 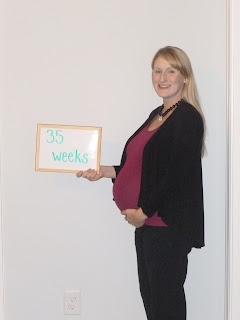 When I went to my weekly doctor's appointment that week, they were out of my 17p shot. So...I used a progesterone cream for one week and then I went back when I was 36 weeks, 1day and they were still out of the shots. We decided to just be done with them since I was out of any "danger" zone for preterm delivery. Then the waiting began.  I had several nights where I had contractions fairly consistently, but nothing that ever became stronger or closer together.  On Saturday (36weeks, 5days) I went with my Mama and my Mother-in-law to tour the Holiday House that the Charity League decorates each year and I answered lots of questions about "how much longer". I really felt like it could be any time, but I knew that I may still have several weeks yet.

That night I went to bed and awoke around 1:00am with contractions. Nothing new. I thought these were the same contractions that I had been having every night when I'd wake up. But then I couldn't get back to sleep...I tried eating a snack, walking around, and finally took a bath. And they never quit. We decided to call my Mama around 3:00am so I could go into the hospital and be checked. She came and stayed with Colson and Lilly-Belle and we headed to the hospital.

I went into the triage room about 3:30am and they hooked me up to the monitors and confirmed that I was contracting. They checked me and I was about 3cm dilated. They decided to keep me for about an hour and see if I was making any progress...an hour later I was 4cm. This was it!

At this point, Mama had called Nick's parents who came and stayed with the children so she could come to the hospital. Mama also called the massage therapist I'd been seeing so she could come in to help with my labor. They moved me to a labor and delivery room and I settled in. Tiffany, the massage therapist, came in about 5:30 and spent the next 4 hours working on my pressure points to help move my labor along. I was making good progress, and it was so neat to see how the reflexology really increased the intensity of my contractions. I opted to pass on the epidural (since I had Colson and Lilly-Belle without one, I felt like I would be fine).

About 9:30, Tiffany had to leave because her family was lighting the Advent candle at church that day. When she left, I was 6cm and I stayed there for a while. Since my contractions had slacked off a bit, Nick decided to make a quick run to get some breakfast and check on the children at his parents. Not long after that I started to have some painful contractions so I had Mama call him to come back. He was coming back into the hospital about 10:20am, just as the doctor was arriving. My midwife was in Texas visiting family, so another doctor from the practice was going to deliver ButterBean. He came in and checked me and I was at 7cm. At this point, he said he would break my water and I'd probably have a baby by early afternoon. Early afternoon!?! I was in quite a bit of pain, so the thought of several more hours sounded daunting. It must have shown on my face because he asked if I'd like a little something to "take the edge off". He said I'd still feel everything, but I would just relax. Yes, please.

Now my water has been broken and the nurse is just putting the medicine into my IV. As soon as this is done, I tell her I need to push. I can feel the medicine kicking in...which made me feel more drunk than relaxed. Nurse Nancy says not to push and she gets the Doctor to check me. I'm now at 10cm. I think I could have handled the 5 minutes it took me to go the last 3cm, but we had no idea how fast I would go.  Things get set up as I keep telling myself not to push and then I distinctly remember the doctor looking at me and saying "You're going to push the baby out now." I was thinking, "Why didn't anyone tell me I could push?" (thank you Stadol) Nick was in position to "catch" the baby and I pushed through two or three contractions and out came a precious little boy! 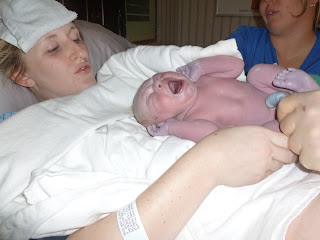 He was absolutely perfect and the moment he came out all I could think was, "It's you. It was you all along. My little boy!" We had some bonding time before they took him for a bath and to do all of his checks and such. I just kept thinking how perfect he was. My little Sam. He was born at 10:54am, weighing 6lb, 9oz, and 19.5inches long. 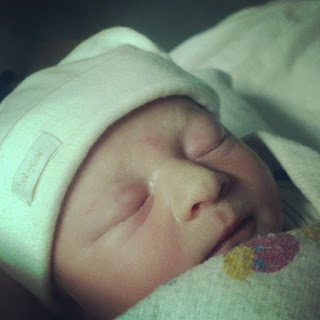 We stayed in the hospital until Monday evening and then we were released to go home. From day one he has been the sweetest little baby. 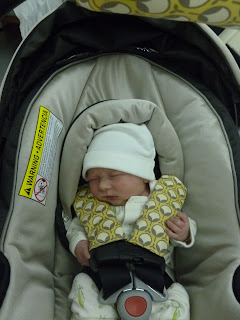 The first two weeks were definitely an adjustment...but not for any reason due to Sam. Nick and the kids were sick that entire time and when he was just a week old I got mastitis and some pretty bad baby blues. All I can say is thank goodness he is such a good baby. By Christmas things were getting better. I was so thankful we were all better and could enjoy the holidays. 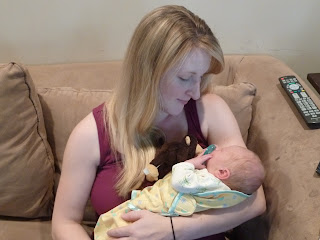 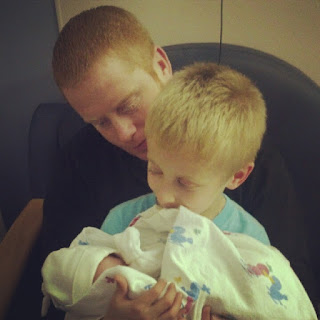 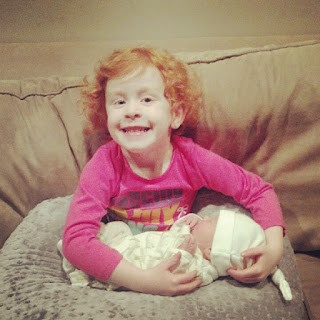 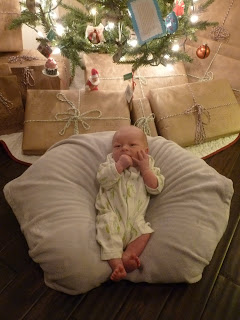 The days have just flown by and now our little man is one month old. How is that even possible?!? Here is his One Month Stats:
Weight: 8lb 7oz
Length: 20.5inches
Sleep: About every 3 hours, but will sometimes have a 4 hour stretch.
Awake: Is very alert first thing in the morning and then for a good amount of time in the evening.

Sam looks a lot like his big brother Colson. He has the sweetest temperament and is showered with hugs and kisses from the entire family! 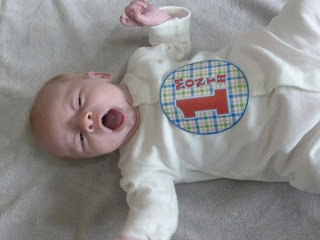 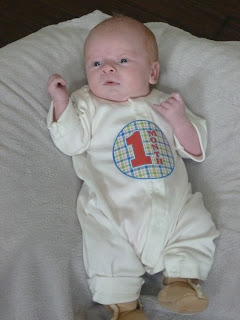 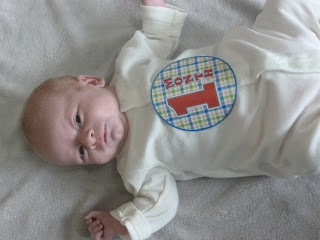