So ya' want to know what's NOT fun??? That would be going through the laundry fail that happened to me yesterday. Domestic goddess that I am, I decided to multitask several chores so I threw in a load of laundry and went off to sweep and wash up the dishes. I heard the machine cut off went to the mud room to switch everything to the dryer. When I opened the machine, nothing could have prepared me for what I discovered.

No, it wasn't a red sock in with the whites...or bleach on my darks. 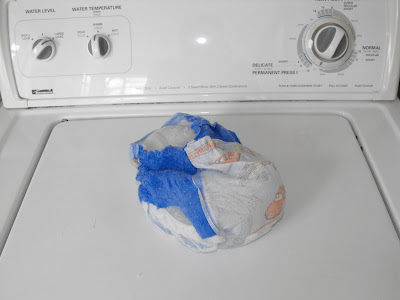 It was something that is supposed to help prevent messes. Yep, it was a pull-up. Let me rephrase that, a Busted Pull-Up! My Monkey still wears them sometimes at night just as a precaution, but no more. I'd rather wash sheets a hundred times over to avoid the mess I made yesterday. In my haste to accomplish maximum work in minimum time, I overlooked the pull-up that was in a pair of pajama pants. As I pulled each article of clothing out of the washer, I had to shake off a thousand of little gel pellets. It was an absolute mess! Two rinse cycles later, the clothes were mostly clean and I was able to dry them (no harm done). Moral of the story:
A bad job done twice is never as good as a well job done once.
...or my moral: feign incompetence and hope your hubby will do the laundry instead.

Labels: It Would Happen To Me