A blogger I read regularly posted a response on her blog today to some very negative feedback she received after an interview she did on parents giving their children non-prescription medicine. After reading the article I felt that what she said was "rearranged" to be put into the context that made it sound the worst. But what got to me...really got to me...were the comments on the article. The comments were self righteous, rude, and ignorant.
I understand that no, you shouldn't drug your children, but it wasn't just that topic that was addressed by the respondents. They were commenting on motherhood. And according to these people, they were the perfect parents and had the answers to it all. I think as mothers we are too hard on ourselves.
When I became a mother I didn't know that one child would roll off the changing table into the laundry hamper. Or that I give the other a sucker before they were a year old just to keep the peace. I didn't know that one would strip down naked and color themselves and my couch orange with a Sharpie while I grabbed a few extra winks. Or that I'd even consider that one (at about 6 months) had broken their nose after a not so graceful swan dive off the couch...while I was watching them...from less than a foot away.
Mothers need to know that this crap happens to everyone. And if they say it doesn't then they are liars. We are human. We make mistakes. And they are children; they will push boundaries, take risks, and make their own mistakes. We just need to accept this and move on because there is no such thing as the perfect parent or the perfect child. If you spend your life chasing after the idea of being the perfect parent then you'll surely miss all the fun.
...and just to make you smile! 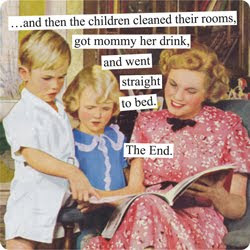 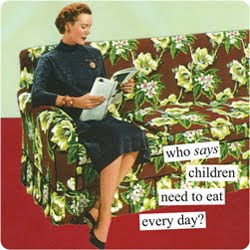 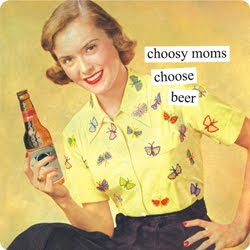 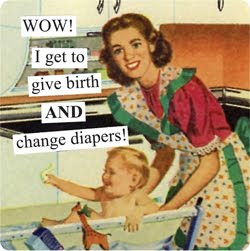 All images courtesy of Anne Taintor.

Posted by Southern Belle Mama at 11:19 AM

Labels: In My Opinion..., Motherhood