I'm a bit stuck as of late...I don't know if it's the weather (these gorgeous Spring days entice me to be out and about rather than behind the computer) or just plain old writer's block (if I would consider myself a writer), but I just don't have a whole lot to share. So, for lack of a more intriguing post, I thought I'd share some of my favorite "Colsonisms" that our little Monkey has shared.
After spinning around and around, "Mommy, why is the house turning?"
Upon being called to the bathroom to once again examine his poo, "Oh man...I think it's hiding it that cave down there!"
While driving in the car one night, "Hey! Why's the moon following us?"
As I was eavesdropping on him playing alone in his room, "I thought I told you guys, 'No hitting!' That's it. Time out." (Apparently, even imaginary friends have time out.)
While playing basketball with his Nana he made the comment about a fellow imaginary teammate, "Between you and me, she's not very good."
This child keeps me laughing every day...I do love him so! 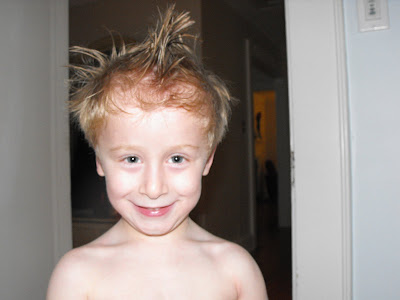 The hairstyle I tried to talk him into wearing for his class picture day today at Preschool...he wasn't having it. At least the boy has some sense about him.