On Friday I sent the RedHead a text saying that I had the wonderful idea that we should take a road trip to Boone on Saturday. He texted back that he'd been thinking the exact same thing. So Saturday morning we loaded up the babes and headed up the mountain. We live about 2 hours from Boone so the timing was perfect for the Bug to take her morning nap and we broke out the sacred DVD player (which we reserve for long car trips) for the Monkey to watch.
We got there and ate lunch at Back Yard Burger...so yummy! We don't have one in the town where I live, and it's probably a good thing because I could eat there every day! We then rode around and looked at the new stadium on App's campus and commented on how we wish we were in college now and could enjoy all of the new amenities instead of being there when all of the construction was taking place. 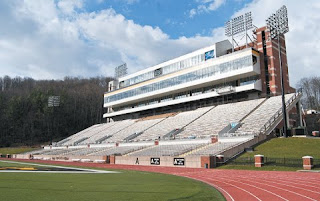 We then headed to the Tanger Outlet Shops and I got some much needed new clothes from JCrew and Banana Republic. I bought mostly tops and only one pair of shorts because I'm holding out on the hope that I will be back in my other shorts after this Boot Camp is over. After shopping (since the children...and the RedHead were so patient) we got some icecream at Kilwins. I swear that stuff is made of gold because the one milkshake for Monkey and the cone that Red and I split was $12! It was tasty, but not $12 tasty.

We got to go visit some friends who still live up there and then we headed home about 6:00. Neither babe had had an afternoon nap, so they slept on the way home and then they were ready to party when we got home. Needless to say, bedtime got pushed back and so we skipped church yesterday. We had a great time, but in our true style, we didn't take a single picture (hence my random borrowed pics from google image). I like to say it was because we were too busy having fun, not taking pictures of the fun, but really we're just kinda lazy like that.

Posted by Southern Belle Mama at 11:13 AM