I have started keeping one of my good friend's two precious little girls on Fridays. So from 7:30 to 3:30 I have 4 children (ages 4,3,2, and 1). The two littlest ones go down for nap at 1:00 and then about 1:30 her older daughter has a rest time for about an hour.
That leaves me with my Monkey to deal with.
Normally, he goes down for nap around 2:30 and sleeps until 5:00. Yes, at 4 years old he still sleeps 2 1/2 hours. We've tried, on occasion, to eliminate the nap, but only with hell to pay later that evening. So...last week I tried to let him only "rest" but later that evening while I was out I received a video text from the RedHead showing Monkey pitching an Oscar worthy tantrum.
The plan for today was to put him in the playroom (the only room left once you're trying to separate 4 kids) to nap. Well, he was completely quiet, but when I went to check on him about 45 min later he was wide awake. No nap today.
So here's the Top 5 Reasons My Monkey Can't Give Up His Nap!
#5. He has needed 3 snacks, 2 cups of milk, and 1 cup of juice in a 2 hour period. Comfort food.
#4. I had to hear him whine about "forgetting" to play with a fishing pole toy at their house. He saw it, he forgot to play with it, he whined.
#3. Exhaustion quickly went from whining to anger. I was now responsible for not telling him to play with the toy. And when I tried to comfort him with a hug, he hugged back...just a little too tight!
#2. His mood was catching. The Bug is not one to be left out, so she started cranking out her own fuss (even though she had a solid 2 hour nap). One fussy child is bad, two is too many!
#1. After I quarantined him to my bedroom to watch toons until his father came home, I found him like this. * 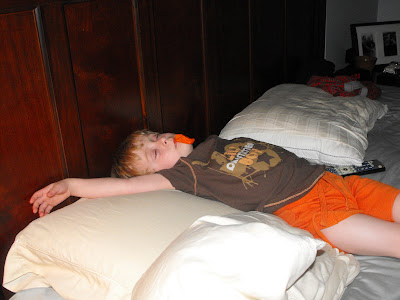 *Don't worry. I removed the balloon from his mouth before I left the room. You have to be some kind of tired if you fall asleep while blowing up a balloon.
Happy Friday!