Connecting With The Duggars

I am not a devoted fan of the Duggar's show " 19 Kids And Counting" but I do watch it on occasion. I became really interested in seeing the new episodes where the family goes through the premature birth of their most recent child, Josie. Their little girl was born at 25 weeks, weighing 1lb 6oz and had to be delivered due to Michelle developing preeclampsia.

When I saw the previews, I had so many questions. What were they going to do since Michelle had to deliver at a hospital 3 hours away? Who was going to take care of her other 18 children? What did the other children think of baby Josie and how were they going to deal with having a sibling in the hospital? Since watching the first 2 new episodes, I know that they are planning on relocating the family to Little Rock until Josie is ready to come home, but many of my other questions will have to wait to be answered. The topic of prematurity is close to my heart because both of my children arrived early.

My son, Monkey, was born at 31 weeks. I had the most wonderful pregnancy; no morning sickness, I felt great, and then out of nowhere my water broke. Now many of you know that they can do a lot to help stop contractions, but there's no way to predict or stop your water from breaking. I was taken by ambulance from our local hospital to one in the next town over that had a NeoNatal Intensive Care Unit. Monkey was born weighing 3lb, 9oz. He had difficulty breathing, so he was put on a ventilator which he quickly graduated off of and then went to CPAP and finally to just a nasal cannula. He was given surfactant to open and mature his lungs, caffeine to stimulate his breathing, and had a feeding tube inserted to control his feeds. His first days were spent in an isolate, not in his mother's arms. He developed jaundice and had to be put on a bili light. Despite all of this, the child progressed...and quickly! I have never been more in the presence of the Lord than when my child was in the hospital. He was a fighter and after 3 weeks he was ready to come home, which was actually very early! He was essentially 34 weeks (34 wks is the earliest they will release a preemie) and my little 4lb man was mine to take home! He failed his car seat test, so he came home in a car bed with me sitting in the backseat guarding him from every driver on the highway. Those days of driving to the hospital every day to be with him, then leaving him at night (only to call multiple times throughout the evening and night to check on him) seem like yesterday. After all this, 2 1/2 years later, we had to decide what to do about having another child. Was it safe? Was there any preventative measures we could take? What would we do if our next child came early? 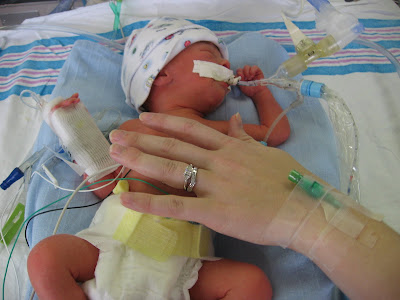 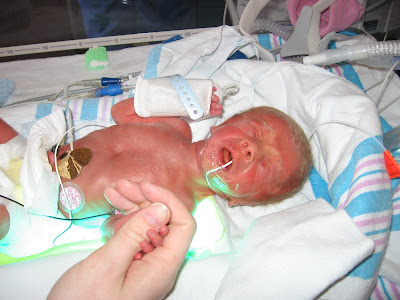 When I became pregnant with my second child, we were cautious from the get go. I have a wonderful midwife that was willing to work with me and watched over me like a mother. Since the birth of my son, there had been the development of the fetal fibronectin test that can predict changes in the cervix in 2 week intervals, so beginning at 26 weeks I had a test every 2 weeks. We also did multiple ultrasounds to measure the length of my cervix and make sure it wasn't shortening. I went out of work at 31 weeks to avoid any additional stress. We took every precaution, all of my tests were negative, and I was able to carry my daughter, the Bug, to almost 36 weeks. Her hospital stay was very different, yet similar in some ways too. This time we only stayed for 5 days (yes, "we"! The hospital assigned her a regular room and I stayed as a guest) and even arriving a month early, the little piggy weighed 6lb 9oz. She did have to receive oxygen via an oxyhood and be on a bili light, but her situation was nowhere near as precarious as my son's. 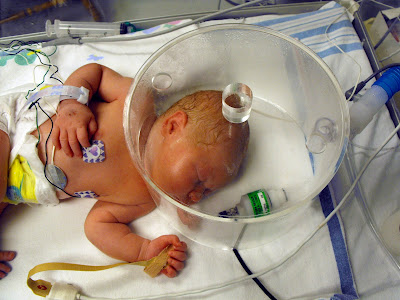 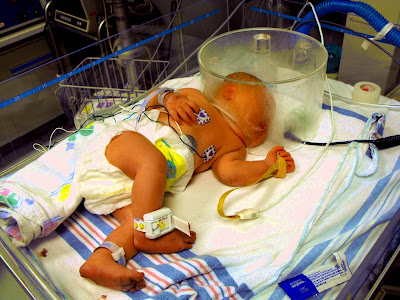 So back to the Duggars. I guess I want to see what happens, how their family will handle this time of difficulty because what they are going through is what I'm afraid of happening should we have another child who arrives prematurely. I know that there will be a lot of prayers as we ask God to help us decide if having another child is in our future (not the near future though!), but one thing I have already seen in these 2 episodes is that if you rely on God things will work out. They have family and friends to help care for their other children and have been blessed with the option to relocate their family to Little Rock until Josie can come home. I pray that their precious little girl will be okay, and that they will be able to bring her home healthy and happy. I also pray that God will lead us to know what is right for the future of our family.

Labels: About Me, My Monkey, The Bug